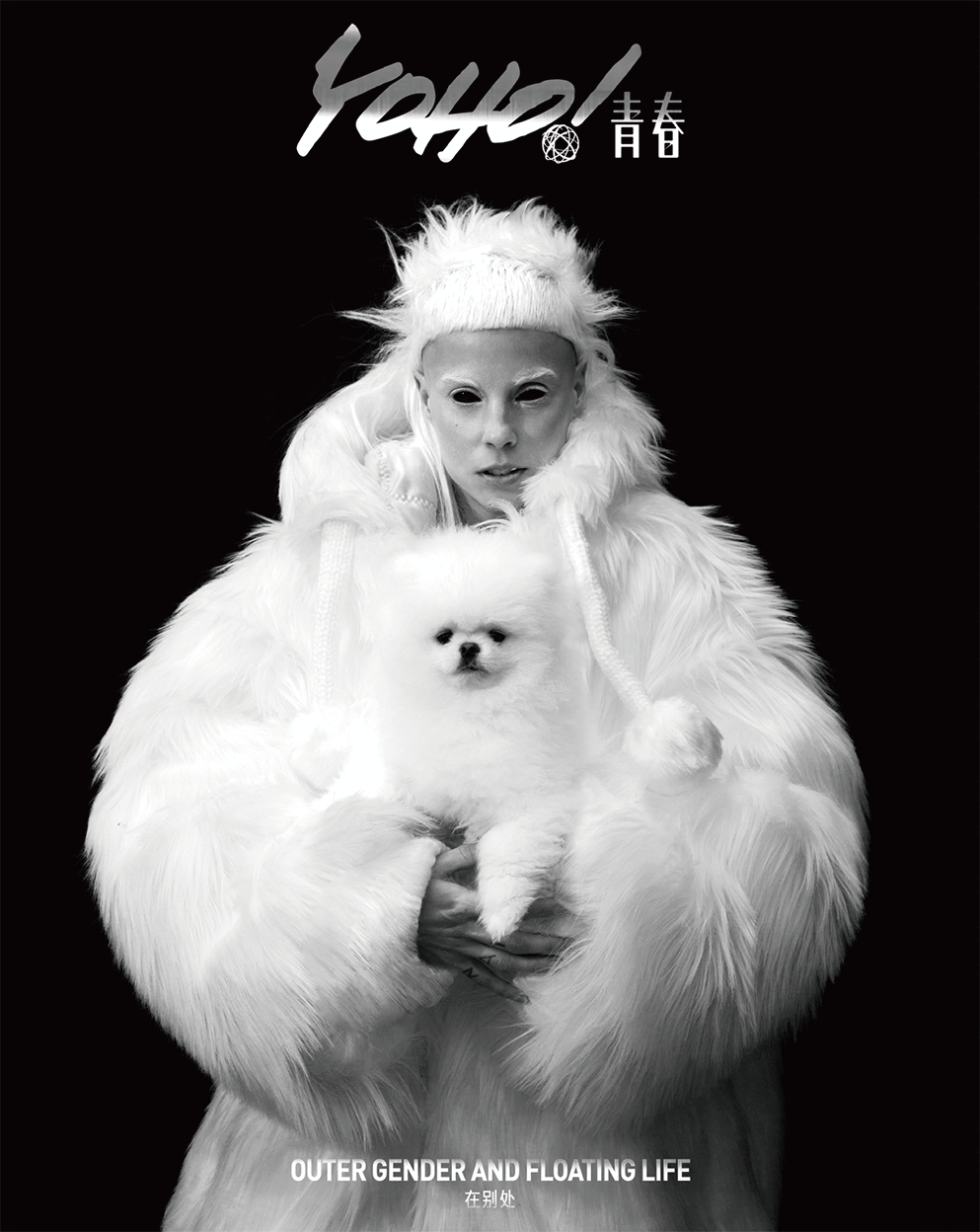 THE ETERNAL BEAUTY OF DARKNESS, ROOTED IN THE MIRE, NOURISHED BY DECOMPOSED WATER, GROWING UPWARD, OPENING RADIANTLY INTO SPACE AND LIGHT.

An unexpected journey of two random Asian girls into the dark dangerous depths of Africa, with Ninja and ¥o-landi as their travel guides – the freeky South African rap duo known as Die Antwoord.

We booked the trip for summer vacation just to chill and check if everything really was like the way it is in ‘The Lion King’, but when Ninja and ¥o-landi arrived at the door of our hotel in their matte black ‘Initial D’ style Subaru WRX STI, playing “Drowning” by A Boogie wit da Hoodie super loud, suddenly they changed the vibe of our African adventure from Simba to Zef psychedelia.

Our conversations with Die Antwoord started on a WhatsApp group with an instant connection that formed between us bizarrely fluid and easy, like chatting to long-lost friends again. This bond grew stronger each day, and at a certain point, it exploded in Cape Town. This book is the ashes of our mysterious travel memories with Die Antwoord and their Zef family in 2019.

We stayed in a fancy hotel facing the South Atlantic Ocean in Camps Bay. Behind us was the famous Table Mountain. Our holiday resort fantasy bubble was popped very quickly when Ninja and ¥o-landi took us behind Table Mountain, deep inside one of the most dangerous ghettos in South Africa known as ‘No Rules’.

Besides the beautiful animals and breathtaking nature, South Africa has the 3rd highest crime and murder rates in the world, and is one of the most economically unequal countries on the planet – the rich living right next door to the poor.

NINJA – “Being born into the 3rd world is like being born into hell. People are born with nothing. Imagine being born with everything against you, and every day of your life you have to fight to survive. Everyday there is an average of between 40 and 60 murders in South Africa, every 3 hours a woman is raped, and every 5 minutes, an African child goes missing.”

DARKNESS IS OUR FIRST REALITY, THE LOOMING RIDDLE OF OUR BECOMING

The Tribe Of Zef all have curious fashion sense. Everyone rocking fresh sneakers, and designer flip-flops, ASICS running shoes standing next to GIVENCHY and GUCCI slides. The men and women all wear long skirts covered in elaborate African prints. Some bare-chested, some rocking netted tank-tops, some wearing blankets for hoodies, topped off with peaks caps, turbans, and gold bling mixed with African wooden beads. Everyone (men and women) stylishly armed with killing staffs, machetes, beautifully engraved knives and other hidden weapons (for self-defence purposes).

We found ourselves having a language exchange session. The typical tourist conversation – “How do you say this in Afrikaans?” “How do you say that in Chinese?” These African rappers were instantly enchanted with Chinese sounds, words and tongue twisters. “This” in Chinese sounds like “jei-ge”, and “That” sounds like “na-ge”. The rhythmic sound of these South African rappers repeating “Jei-ga-na-ge, Jei-ga-na-ge, na-ge, na-ge” rapidly became the soundtrack to our holiday. I suddenly found myself rapping Chinese tongue-twisters about grapes and monks, with two guys with dreadlocks so long, they looked like ‘Dragon Ball Z’ characters in transformation.

One of the South African rappers I was introduced to was a high ranking member of the Tribe Of Zef called Bukhulubakhe, which means ‘Your Highness’ in Xhosa, a click-laden African language.

BUKHULUBAKHE – “A lot of the big rappers in South Africa rap with American accents and flows, and dress in American styles. Because people think wow! America is the best. I suppose it is because some South Africans look at American culture and they see how the rappers over there are rich and empowered and so they want to feel this way too. But the problem is, no one from America wants to hear someone from Africa rapping in an American accent. So although these local rappers are ‘big’ in South Africa, no-one ever really makes any noise overseas. I respect Die Antwoord, because they rap in their mother tongue. I myself rap in Xhosa, and when I flip to English, I maintain my African flows and African accent. This is why I am in this camp, making the best music in the world, music with the power to shoot open the doors to the overseas.”

¥O-LANDI – “We create art out of the chaos we come from. We moved to LA for 4 years but over time, we became sad there, because in LA everything is fine. We lived in a big mansion in the Hollywood Hills and at 1st it seemed amazing, but soon began to miss Africa like crazy, but we thought, no, we have to carry on pushing here, this is what we have always dreamed about! But LA was too much like a paradise. I’m sure LA definitely has it’s problems, but compared to South Africa? It’s strange, I was born fighting, born with enemies. It’s what I am used to. Living in difficult situations makes me happy, it gives me purpose. Because now I have enemies to fight, and people to help. When I am filled with attack energy I am fire, because it brings me joy. Without a challenge life is boring. The bigger the challenge, the more creative we get. LA was just too comfortable. So we moved back home.

NINJA – “In Africa we grow like trees out of all the shit that goes on here. The negativity in Africa is almost nuclear level, but if you can harness this nuclear energy, you can light up a whole city. All the chaos here, all the friction, all the diversity, all these crazy weird vibes. It’s what makes us super creative. We left LA because we have work to do in South Africa. It feels like we are meant to be here.”

At around 9pm, all Tribe Of Zef members started leaving, Ninja and ¥o-landi were already in bed – yoga and meditation starts at 4am every morning (I found out more about this strange yogic discipline of theirs later during our trip). Suddenly, the only people awake and active left at the party were us, the two relaxed Asian tourists, and the children of the Zef Family: Sixteen, Meisie, Tokkie, and Jemile.

This was not Die Antwoord house party I was expecting. Sipping on a delicious pink gin and tonic (made for me earlier by ¥o-landi) and snacking on a spread of delicious vegetarian food made by by the youngest in the family, Jemile. Before getting to know ¥o-landi and her family, I thought to myself: “How did this tiny alien-nymph, with a V-line and firm six-pack pop out so many kids?!” From chatting with the kids, I found out that Sixteen was their only biological daughter, visually a clone of the two rappers.

Tokkie was 9 when they adopted him from a ghetto in Johannesburg, he’s now 18. Tokkie’s sister meisie was adopted after. Jemile is the last little genius on board with the family. I was enchanted by him. He’s the coolest and most mature kid I’ve ever met. His tooth fell out and he superglued it to his earring. He made his own tooth jewellery.

Ninja and ¥o-landi met Jemille 4 years ago in the same hood in Johannesburg as Tokkie. Jemile was 9 years old at the time, when they found him sitting barefoot, alone in the dark, next to a big fire he had made in a park. He wouldn’t speak to them and ignored them. They found out that Jemile was the naughtiest kid in the hood, and that he was an active little criminal, who broke into houses, stole cars, and set people’s cars on fire if they made him angry.

After N&¥ saw Jemile doing crazy back-flips off high walls onto the concrete below, they offered him a role in a feature film they were busy making, and while they were shooting the film, Jemiles biological mother told N&¥ that he was soon going to get sent to a special education school and that this school wanted to put Jemile on drugs to calm him down.

But N&¥ quickly realised that this was a mistake and that Jemile did not need drugs because he was so smart. He just needed the correct stimulation, and so with his mothers blessing, Ninja and ¥o-landi became Jemile’s legal foster parents. The concept of conventional Asian family comes from bloodline, to carry on the family name. While the way Ninja and ¥o-landi created their family comes from their bigger love of their motherland, their people, and their tribe, The Tribe Of Zef.

“Up until now Jemiles only focus has been survival, now he gets a chance to learn.” – ¥o-landi Vi$$er aka Mother of Rats

I was not ready for the positive energy and the instant and strong connection I made with the weirdest rappers from the other side of the world. I thought the Safari would be the ultimate climax of the trip, but the pair were on fire everyday. Hailing me with creative tornadoes and jokes, mixed with storytelling of South African history and feeding me facts, all the while submerged deep in a super-sayyin creative discipline that involves waking up at 4am in their Zef Mountain Temple in the forest , jumping off a cliff into an ice-cold rock pool in the dark, doing an hour of Kundalini Yoga, followed by an hour of deep meditation, then they drop the kids at school, and hit an almost supernatural amount of creative activity which includes:

1-Writing and recording songs for Die Antwoord’s final 23 track album called THE HOUSE OF ZEF.
2-Creating a series of next-level music videos that accompany the final album.
3-Creating a new episode of Die Antwoord’s music-filled reality show, ZEF TV, weekly, that they release online.
4-Creating a 60 minute documentary about Die Antwoord that they have been working on for the last 10 years, called IS IT REAL?
5-Creating a 90 minute feature film that Ninja and ¥o-landi wrote, funded and starred in, directed by Ninja, scored by Die Antwoord, called THE FLOWER FROM THE OUTSIDE WORLD.

All these zef projects are due to start dropping in early 2020, followed by a wild festive season as Die Antwoord and The Tribe Of Zef leave the dark depths of the African ghettos behind to embark upon their next big world tour.

My zef tour guides like to show and celebrate the culture of the ghetto. What I see they are doing there is to help the living conditions of the place. Fixing the ceiling of a shack-dwelling from leaking or enabling electricity and water. N&¥ are also currently developing a Zef Foundation, that will set- up Zef Soup Kitchens, Zef Yoga Schools, and Zef Rap Schools in the ghettos (among other things). What I found the most precious on this trip was The Lotus flowers hidden in my tour guides hearts, despite the muddy environment they live in.

NINJA – “We are very blessed to have achieved the success we have experienced to date, and even more blessed that we are now able to come home and share what we learned with our fellow African artists, so that they too, can step out into the big wide world with us, making money, having fun. Ninja and ¥o-landi have invited these two lucky asian girls to join the Tribe Of Zef on this magical mystery world tour, with all access passes, all up in the vip area baby! Mmmmwa!

IF ONE CONSCIOUSLY ENTERS INTO THE DARKNESS AND BECOMES ENRICHED BY THE NOURISHMENT IT OFFERS, ONE LEARNS TO SEE AND HEAR THE BEAUTY THAT EMANATES OUT OF IT. DARKNESS WILL BECOME THE FAMILIAR AND MYSTERIOUS SOURCE OF INSPIRATION AND TRANSFORMATION, GROWTH AND HEALING, TO WHICH WE GRATEFULLY RETURN.